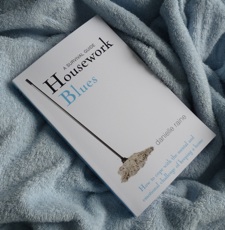 The results of housework are all too fleeting. You spend your time performing boring tasks and before long, they need doing again. There’s not much scope for any earth-shattering achievements, right?

Wrong!A surprising side-effect of monotonous jobs is the activation of your creative mind. The mindless, empty-headed state that comes form boring jobs is actually a fertile ground for for creative thought, intuition, problem-solving, even flashes of genius. This productive state is known as the alpha state – which is brain-speak for a deeply relaxed mental state. It occurs during daydreaming, idle reflection, and just before and after sleep. And during housework.

Contrary to expectations, when we switch off our brains, we don’t become witless zombies, we are actually primed to tap inner sources of inventiveness and imagination. According to the New York Times, neuroscientists have found that, even when the brain is disengaged, it is still highly active. And this activity operates on a higher level to everyday thinking. This downtime for your brain actually gives you access to intelligence which is denied to the busy, conscious mind. Stilling the mind sets the mental scene for your greatest ideas!

For proof of this, think of when and where the great minds had their light-bulb moments. Archimedes was in the bath when he shouted Eureka. (Highly relaxed) Einstein was out walking when he discovered the theory of relativity. (Moving meditation) Newton was sitting quietly under an apple tree. (Brain downtime) You may even have had your own Eureka moments. Have you ever struggled with a problem or dilemma, only to have the answer ‘pop into your head’ when you were doing some mundane activity?

The brain is particularly receptive to inspiration and creativity during unchallenging, ‘brainless’ tasks – in the shower, driving,….washing-up. This very book is a case in point – the idea for it occurred to me as I was on my hands and knees scrubbing the kitchen floor. And I’m in good company – Agatha Christie, a prolific imaginer, famously remarked, “The best time to plan a book is while you are doing the dishes.”

A bored mind is also susceptible to intuition. Women are renowned for their ability to tap into this unknown element (which curiously, and wonderfully, seems to always have our best interest at heart). This may be a gender thing. But it may also be linked to the fact that women have traditionally spent the majority of their time in the home, raising children, building nests. These quiet, contemplative activities are the kind that scientist now believe connect us to some universal intelligence, aka intuition.

So there is merit in boredom. It is a prelude to creativity, problem-solving and innovation. If boredom is a feature of your life – don’t fight it! If you can’t bring yourself to embrace it, then at least turn it to good use. To the outside world you make look like you are just dusting and vacuuming, but inside your mind, powerful forces are at work. And these forces are not only conducive to creative inspiration, they also trigger the information-sorting part of the brain. So you’re tidying your house and your mind at the same time!