The Other Woman (Or: I’m no good at housework) 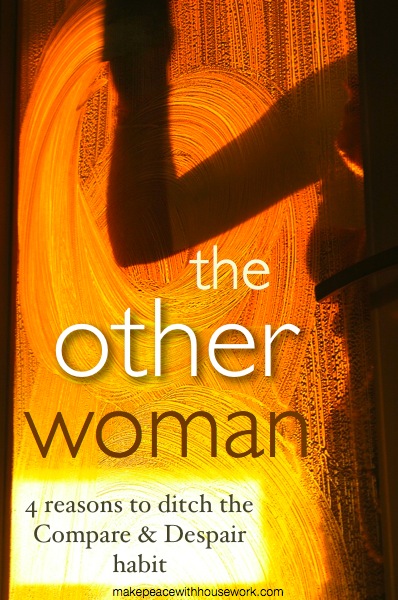 Inferiority is relative. It needs something or someone else to be compared to.

A sense of inferiority arises from comparing ourselves to someone else, someone supposedly superior. Why do we do that? Is it helpful? Very often, it isn’t but it can be automatic and unconscious. It’s a natural human tendency. Everybody does it. But whereas men tend to compare sizes (car, salary, appendage…), women tend to compare appearance – figures, clothes and inevitably, homes.

And as a feature of the modern age, we are increasingly exposed to media standards or celebrities’ homes and lifestyles. So now we also get to judge ourselves against these additional, artificially high, expectations of what we feel we should be doing.

I know I’ve been guilty of proclaiming, “I’m no good at housework. I’m just not as good as most women.” But if we examine this common grievance, it’s actually ridiculous.

Firstly, how could I possibly know how good most women are? I have a reasonable number of female friends but even that’s a tiny sample of the current female population. Secondly, is there really a single standard to which ‘most women’ conform? And who sets this arbitrary standard anyway? If there was just me on the planet, my techniques, standards, would be the norm – who’s to say they’re not the right ones? Besides, why does it even matter what ‘most women’ are doing? We’re not sheep, we’re individuals.

In light of all this, then, it seems obvious that one quick route out of inferiority is to stop comparing our homes with other women’s houses. But that can be easier said than done. So, whist it’s certainly worth remembering there is no single ‘right way’, there is another way to approach the problem.

Instead of focusing on your perceived shortcomings, turn the spotlight onto that which you believe to be better than you. It’s very likely that when you start to uncover the story behind these ‘superior beings’, you will discover that your lofty view of them is based on smoke and mirrors…

Is your marriage like a movie marriage? Are your children like the perfect darlings we see on adverts? Does your hair always look like you ‘just stepped out of the salon’?

Let’s face it, no-one could maintain that level of perfection. Even supermodels admit they’re not as perfect as their airbrushed covers and posters. Why, then, do we sometimes feel pressured to have homes that resemble a magazine spread? Even the home in the magazine doesn’t look like that all of the time! It’s just a snapshot, a small timeframe, until life carries on, people and things gather, dust accumulates.

So be careful with how you relate to these ‘ideal’ homes. Whilst it’s true that interior magazines and TV shows can be uplifting and a vicarious pleasure, keep in mind that they are usually far from the norm. The are intended to be aspirational rather than realistic – to inspire you, as a force for good feelings. (Personally, I love them – they spur me to create the beautiful home that I long for – they make me want to tidy up, which can’t be bad.)

However the danger comes when these artificially perfect images depress rather than enliven. So, if your reaction to them is to sigh with despair, either a) remind yourself how contrived or unlikely that one shot is or b) look at something else!

We all have egos. We all want people to believe a certain version of us, so we gloss over the bits that don’t fit the image. I’m not suggesting your friends or peers lie to you, or you to them, but we may have a ‘best side’ that we’d prefer the world to see, rather than the more realistic and less flattering truth.

So there may be aspects to your domestic life that you’d rather keep quiet. But do you think you’re the only one? No-one is perfect, (which, in my view is a good thing – it would be exhausting!). What you see isn’t always the whole story. So, whilst it’s good to admire those who posses the qualities you’d like, don’t belittle yourself in comparison to their perfection – you are only seeing the highly-polished veneer.

It’s not a level playing field

You cannot possibly know all the facts about someone else’s life. Yes, your neighbour may have a perfect home. But she may also have staff or an over-zealous mother-in-law or obsessive compulsive disorder!

Don’t waste your energy comparing yourself unfavourably to women who seem to effortlessly pull it off. Firstly, you have no idea what effort is actually going on, behind the scenes. Secondly, you are unlikely to know the full extent of any support they may have. For example, your friend may keep an immaculate home but her husband may do all the cooking or her mother may help out with childcare or any number of scenarios. It’s pointless to compare results when everyone’s situation is different.

There are worse problems than a messy home. Those people that you envy may be facing issues so serious they would swap lives with you in an instant. Everyone has problems, but for some these can be severe, traumatic, life-threatening and permanent. As depressing, exhausting and frustrating domestic woes can be, if this is our biggest problem, that’s actually something to be thankful for.

As always, I’d love to hear what you think!

This post is an extract from: Housework Blues – A Survival Guide.
Available in paperback and ebook formats. Click here for more details.